This july I attended the Gnome Users and Developers European Conference taking place in Almería, Spain.

Initially, I had no idea what to expect out of it. I have been told it’s a great event with people from all around the world and a lot of fun stuff going on. After booking both my flights and my lodging, first thing I did was sign up for the event. The registration process gave us the option of volunteering there. Having attended a few other events (read: music festivals, heh) as a volunteer and barely knowing anyone who would be at GUADEC (aside from my mentor and a couple of fellow GSoC students), I concluded this would be a good way to make new friends while helping around wherever needed. I am glad to say this was a great call and I enjoyed it a lot. Registration desk was mostly what I helped with, but at need, I also helped with introducing speakers (which also meant I introduced my mentor Carlos’ talk!), handing microphones at the Q&A part of the talks and a few other things. Volunteering felt great and (should I attend next year’s GUADEC) I’d love to get more involved in it, maybe even coordinate the volunteers or help coordinating them.

While volunteering was fun, the nitty-gritty of GUADEC are the talks and BoF’s (Birds of a Feather) taking place. I attended quite a few of these (and thoroughly enjoyed as I previously had very low knowledge on the subjects) such as: Matthew Leeds’ “P2P distribution of flatpaks and ostrees” (which made me realize a few things about how we currently distribute our products and had a really good demo at the end to wrap everything up nicely), Kat’s “Plan your testing” (which, as you might’ve guessed, I wanted to attend considering my project’s main focus), Benjamin Otte’s “Have you ever developed for a GPU?” (One of my favorite talks as it seemed to have a different approach compared to the others and put things into perspective with simple yet self-explanatory demos), Carlos Soriano’s “DevOps for GNOME” (whose approach might’ve just revolutionized GNOME in the last year or so) or Tobias Bernard’s “Designing GNOME Mobile” (which, again, felt like a breath of fresh as the subject fit Tobias like a glove and it stirred up further discussion on the matter from the attendees). During the BoF’s days, I took part to the GitLab workshop which showed intricacies on how the gitlab ins and outs work on large scale projects and (one of my favorites!) the Beach BoF! On the first BoF day I managed to get most of us interns together for an evening at the beach. Sooner or later, it all turned into a sandcastle competition! Fun was plenty and two fellow interns decided to create their own BoF at the beach the following day (and it was a success, bringing together both the new blood and the veterans of the GNOME community in order to have some fun together). While I barely knew anyone coming here, everyone was friendly, welcoming and overall quite chatty so the social events were a resounding success (the castle visit and the flamenco show being my top 2 picks!). I can (and am glad to) wholeheartedly say I left GUADEC with more friends than I had before getting off my flight there.

All in all, I would like to thank all of the people whom I got to know better at this event: Sam, Matthew, Niclas, Ruxandra, Iulian, Jiahui, Bastian, Julian, Jordan, Carlos, Kat, Ben and all of the lovely GNOME people who made me feel I’m part of their community!

I’d love to wrap this up with a photo from the Beach BoF (courtesy of Sri Ramkrishna): 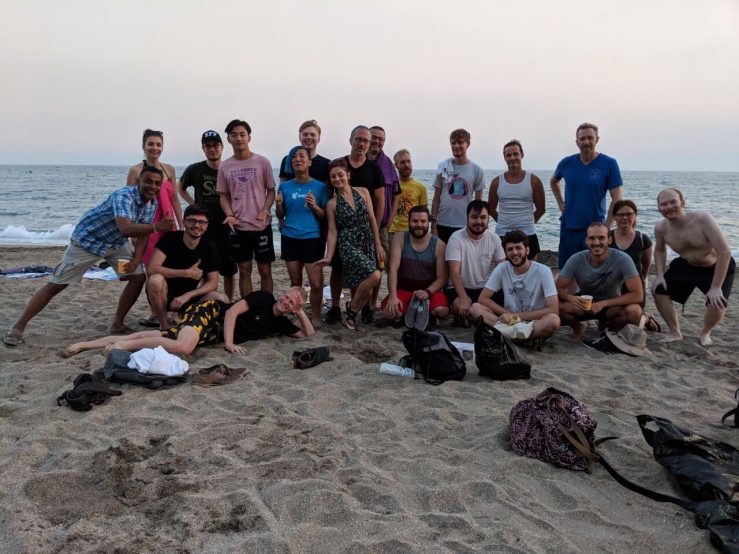 View all posts by alexfazakas